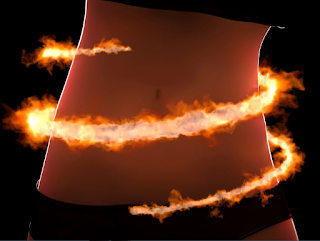 That sports and exercise help with weight loss , most people know that. Eating less than eating your energy needs also helps. But many people do not know that specifically to burn the unhealthy visceral fat, exercise and moderate intensive exercise is most likely much more effective than dieting. Read here what the best approach is to burn this unhealthy fat.

What is visceral fat?

Too little movement increases the risk of insulin resistance. Insulin resistance can lead to type 2 diabetes. This is why it is important to exercise adequately. In addition, too much visceral fat is a major risk factor for the development of insulin resistance. How these mechanisms influence each other is not entirely clear yet. An interesting question that arises from this is whether it is also possible to burn the unhealthy fat with movement. A lot of research has been done on this. Below is an overview.

Research: the influence of movement on visceral fat

Several studies have been conducted into the influence of physical activity on visceral fat. In this article I discuss the two most important overview studies.

In a retrospective study from 2013 looked at the effect of physical activity on visceral fat in overweight and obesity that are not on a diet went  [1] . For this, all reliable studies on this subject have been combined. Another important condition is that people participate in an exercise program for at least 8 weeks.

A more recent  overview study from 2016 examined whether cardio has a different effect on the burning of visceral fat in overweight people compared to a calorie restriction  [2] . The selected studies contain a number of important conditions, including:

At least 2 physical activities per week.
Minimum period of 4 weeks.
Minimum duration per training of 20 minutes and varying from low to high intensity.
Conditions for calorie restriction:

Results
The research results from both overview studies show that exercise leads to a reduction in visceral fat in both men and women. In both studies the effect in men was slightly larger than in women. It is not yet clear where this difference occurs.

However, this combination has only been investigated in two studies. The explanation for this difference is not yet clear.

The overview study from 2016 shows that both cardio and diets contribute to the burning of visceral fat, but that cardio is much more effective than diets. The explanation for this is not yet clear.

In addition, it is striking that only diets are nevertheless associated with more weight loss than just doing cardio. A third interesting result that emerges is that in the absence of weight loss cardio on average resulted in a reduction of visceral fat by 6.1%. Diets, on the other hand, resulted in an average decrease in visceral fat of 1.1% in the absence of weight loss. However, these figures lack context. Like what time period did this effect take place? And how intensively did the participants move?

Yet these figures show how important it is not to stare blindly at weight loss. Because only weight loss says pretty little if you do not know where profit has been achieved.

Comments from the 2013 review study

There are a number of comments on the first overview study, including:

It is not clear what kind of diet the participants had.
The design of the studies is different on a number of points (which causes heterogeneity). For example, different training protocols have been used. Also, the average age, BMI and man / woman distribution were not the same in every study.
In addition, the question is whether people also moved as much as they had reported.
Another side-note has to do with the fact that it is unclear what the long-term effects are of movement on the burning of visceral fat.
Kanttekeningen review study from 2016
There are a number of comments to be made about this research, including:

The design of the studies is, as in the studies in the overview study from 2013, on a number of points different. Despite this limitation, the researchers are convinced that the heterogeneity between the studies does not influence the conclusions.
It has not been examined which ethnicity the participants have. However, participants with different ethnicities within this study were selected.

The review articles mentioned show that moderately intensive exercise in the short term contributes to the reduction of visceral fat in people who did not go on a diet. Second, cardio seems much more effective than strength training and diets in reducing visceral fat. In addition, the 2016 overview study shows that it is also possible that the body burns visceral fat without reducing body weight. What is the long-term effect of moving on visceral fat and how nutrition plays a role in this, will reveal future research.

For a healthy fat percentage, it is in any case important to exercise enough and limit your kilocalorie intake . Do you therefore to move standard and if possible also to the fitness standard . For example, grab the stairs more often and do not sit too still. Walk every half hour a small piece and work step by step on your unhealthy eating habits . If you are older than 50 or you have health problems, you must first be judged by a (sports) doctor.